Gosaikunda Heli Tour or Gosaikunda Heli Trekking is the visit into sacred Gosaikunda Lake which is one of the major pilgrimage sites in Nepal. According to myth, Gosainkunda Lake was manifested by Lord Shiva himself as a resting place to soothe his aching throat when he drank Kalkut poison to save the world from annihilation. Many devotees claim to actually see Lord Shiva sleeping peacefully and covering the entire Lake. Great fare is organized to ease up the burning when he could not said to be the resting place for Lord Shiva. Great fare is organized at Gosainkunda Lake during Janai Purnima during which Gosaikunda receives influx of Shamans, Buddhists and Hindu devotees. Janai Purnima falls each year in the full moon of Bhadra which coincides with the English month of August. Along with Gosaikunda, the region holds 9 other lakes including Bhairab kunda, Saraswoti Kunda and Surya Kunda. Gosaikunda Heli Tour offers close-up views of Langtang Lirung, Langshisha Ri, DorjeLakpa, Sisapangma, Gaurishankar, Kimshung and Langtang Ri mountains. Existing to the north of Kathmandu, this religious site is 2 days of walk away from Dhunche (1950m) and is about 132km far from Kathmandu. Get the best deal on Gosaikunda Helicopter Tour cost. Starting Point : Tribhuvan Domestic Airport, Kathmandu Ending Point : Tribhuvan Domestic Airport, Kathmandu Time Duration : 2:00hrs including half an hour of ground time at Gosaikunda holy Lake for sightseeing Best Time : September- December, January-May

Day 01: Arrival in Kathmandu(1350m) and Transfer to hotel.Overnight at hotel.

Free Day for Kathmandu exploring and farewell dinner at the evening at nepali restaurant.

Day 05: Our airport representative drop to you at the international airport and say good bye.

Located close to the lively capital city is the gorgeously festoone 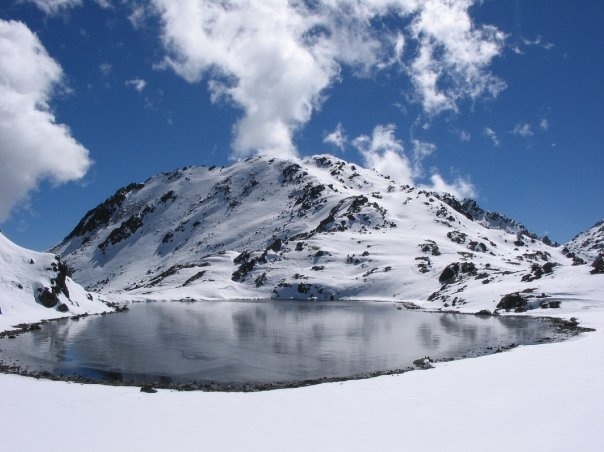