Upper Mustang Trek explores the once independent kingdom and the ‘Last Forbidden City’ famous for its deserted landscape and uniquely shaped hills and mountains beside the unique culture that closely resembles Tibetan culture. Permitted in 1992 for entry to foreigners, Upper Mustang region hosts extensive barren valleys, ancient caves that hide mysteries of yesteryear and worn down canyons watched over by the snow-clad Himalayas such as Annapurna, Dhaulagiri, Nilgiri, and Tukuche Peaks. Pay visit to the ancient monasteries and Gompas built at the edges of barren hills, observe the cultural marvel of Tiji Festival and explore the walled city of Lo-Manthang which is home to 5 storied Lo-Manthang Palace, ancient monasteries, and white-washed houses. Join the Upper Mustang Trek to traverse around unique cultured villages, beautiful apple orchards, farmlands and unique funeral rites that shall create a feeling of being to another world. Upper Mustang Trek begins with the short exploration of Kathmandu valley and reaches to the trailhead in Jomsom after a couple of flights to Pokhara, the Lake City of Nepal, and to Jomsom, the windy town in Mustang district, for the beginning of the trek. This exploration continues, starting from the western bank of Kaligandaki River, the holy river that has Shaligram stone which is the symbolic representation of Lord Vishnu for the Hindus, and head on to Kagbeni which marks the entry into the mystical valley of Mustang. Traversing through the villages of Chele, Bhena, and Syangboche, we move further into the heart of the valley. Exploring the ups and downs of the arid trail and being watched over by the mountains, we head on to the famous walled city of Lo-Manthang after paying a visit to the Ghar Gompa, the oldest monastery in this region, and the biggest library of this region at Tsarang. Guarded by high walls and overlooking the vast arid landscape and mountains, stands the old Lo-Manthang Palace at the center of this region. Home to the last monarch of Mustang, Jigme Dorje Palbar Bista, Lo-Manthang Palace watches out three red-walled monasteries at the heart of the town, the caves at the hill slopes in the rim of the valley, and the ravines, rock shelves flanked by the snowy mountains. From the plateaus of Lo-Manthang bordering Tibet, we head on back to the Kaligandaki valley through the settlements of Yara, Tangge, Chhusang, and Ekle Bhatti before finally moving to Jomsom. Intermittently, we shall explore the traditional lifestyle of locals, savor the salt-butter tea, witness the ancient Teji Festival influenced by Tibetan Buddhism and go on an excursion around the scenic Pokhara valley. We then head to Kathmandu for ending the adventure. Get the rare privilege of being on this ancient city and time travel to the world heritages of this rain shadow area in Upper Mustang Trek. Though trekking here can be done around the year, March to June and September to November are the preferred season for trekking here. Join this restricted trekking region with  Himalayan Holyland Treks and Expedition for quality service and experience the magic of Tibetan Buddhism, unique landscape and diverse flora and fauna of the region.

Day : 18 Departure Day to your destination.

Our team member will receive you at the airport and transfer to hotel. After the check in, you will be given briefing about the whole program and collect papers documents for TIMS and permits. Enjoy your    overnight stay at the hotel. B/B

Preparation  day for permit and short visit around Thamel or Kathmandu Durbar Square. In the evening , guide will come at the hotel for detail briefing  about the trek. Overnight at hotel. B/B

Kathmandu to Pokhara(850m) by A/C tourist bus about 7 h drive. In Pokhara, our guide will take you around Lakeside. Overnight at hotel. B/B

Pokhara to Jomsom(2720m) flight(20m)  and after breakfast  we start trek to Kagbeni all way to Kaligandagi river bank where fossils or Shaligram can be found(2800m) 3h. Overnight at the guest house, B/L/D

At the end of this village, there is entry point for Upper Mustang trek and we walk  to Chhusang for lunch. Just before we reach Chele, we cross the river from where we can see beautiful landscape of this region. Overnight at the guesthouse. B/L/D

The trail follows steep up from Chele for about 3 hours and we reach Samar where we take lunch with view of Mt Annapurna and Nilgiri range. After lunch we continue to Syangboche passing a village called Bhena. Overnight at the hotel, B/L/D

This day the trail is up and down and we pass Nyi La(4020m). We can see Mt Annapurna and Nilgiri range.  There is a long Mani wall and monastery  in Ghami. Overnight at the hotel, B/L/D

There are two different trails to go to Tsarang, one goes through Dhakmar and another goes directly to Tsarang. We take the trail of Dhakmar . After this village, there is a pass called Muila Bhanjyang (4170m).  We continue our trail to Ghar Gumba in the altitude of 3920m. This Gumba(Monastery) is one of the oldest in this region where we can see scriptures of Padhmasambhava(Bodhisatwa or enlightened one) and specially this monastery is of Bhuddhist Nyingma pa sect(group).  Then the trail goes along the Tsarang Khola through Marang village to Tsarang. When we enter this village, we see a monastery which is also an old palace and there is also the greatest library in this region. Overnight at the guest house. B/L/D

The trail goes up and down this day, we pass a beautiful chorten called Sungda. Then continue to Lo La(3960m) pass, from where view of Lo -Mangthang village can be better seen. And the trail goes down to Lo – Manthang.

This is the day full of activities since this village has about 7 monasteries which are all of Gelukpa sect(A Bhuddhist sect). We will explore Lo- Manthang Palace and visit some monasteries meeting people. You can enjoy walking  around the Tibetan

The trail this day is quite normal, we walk down  climbing few uphills. We will stop at Dhigaun for lunch then continue to Yara. Overnight at the guest house. B/L/D

We continuously walk down looking around the beautiful landscape and taking photographs. Overnight at the guesthouse, B/L/D

Today, here is a quite normal pass called Paha(4218m) then walk down to Chhusang. Overnight at the guest house. B/L/D

We walk all the way along the Kaligandagi river passing Tangbe village where we can see black, white and red chortens then take lunch at Kagbeni. After lunch we walk around 45m to Ekle Bhatti. Overnight at guesthouse. B/L/D

This a quite easy day , we walk along the riverbank enjoying view of Jomsom valley and mountains, we also try to find the stone fossils( Shaligram on the way). We will have lunch in Jomsom and walk around the village where a small museum called Musatang Eco Museum is located. Overnight at the hotel. B/L/D

This is a short flight  just above through the deepest  Kaligandagi Gorge,  still you can enjoy the view of mountain.After the lunch in Pokhara you will have free time to explore this beautiful city. Overnight at the hotel. B/B

You can enjoy the view beautiful landscape, villages and river view on your drive to Kathmandu. Dinner in a typical Nepali restaurant. Overnight at the hotel. B/B

Departure day to your on ward destination or your home country.

For Feet:
-Thin, lightweight inner socks
-Thick, warm wool hiking socks
-Hiking boots with spare laces
-Camp shoes or sandals
-Gaiters for hiking in winter to the base camp if snow there 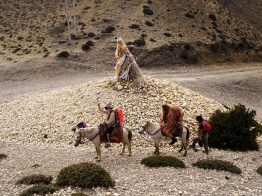 I warmly recommend Nara for any trek in Nepal. Always smiling – like all Nepalese people – he managed our Upper Mustang trip very professionally. This was not so easy as it looks, because there were conflicting ideas among the two of us hiking with him. You can contact him by using the e-mails and phone numbers he provided on this site.

Based on 1 customer reviews.

“The real voyage of discovery consists not in seeking new landsca